The progress of the attacking battalions of the 15th Brigade to the assembly position was slow on account of the dark and gas lying on the low ground. Lieut-Col. Marshall of the 60th Battalion took the decision to wait until the attacking companies of the 59th and the supporting 57th Battalions had arrived. As a result the brigade did not advance until midnight, two hours after the allotted time. The first part of the advance proceeded well in silence, and when a flare was fired the men would remain motionless. Once seen a machine-gun began to open up firing high and erratically at which point the order was given to charge and with it unleashed with a ferocious roar the infantry that with their rifle and bayonet gave no quarter to the enemy machine-gunners. This half hour would rank as one of the wildest experiences of the Australian infantry during the war. The main fighting was on the right where the brigade brushed the village, while to the north and on the plateau the Germans were manning the old British reserve trench that had been dug by the AIF 5th Division. The 60th and 59th having passed the north of the village continued rushing south-eastwards pursuing the fleeing enemy and killing those that remained in their shell-holes, until the objective of the old Roman road on the right and the Villers-Bretonneux-Hamel road was reached, and with what turned out to be relatively few casualties. However there was now confusion as the right battalion, the 57th, had been given orders to move on to what was the old British front line. With senior command not yet available, local commanding officers Capt.’s Peacock and Morgan decided to push on to what was now the old British out-post line, but there was no sign of the 13th Brigade on their right and unbeknown to them they were about 1,500 yards past the farthest point reached by the 13th Brigade attacking the Monument. Their northern flank was about 700 yards ahead of the 59th, and with the Germans beginning to out-flank them the decision was made to abandon the attempt to cross the Roman road so they withdrew to the captured trench-line in the rear of the 59th. 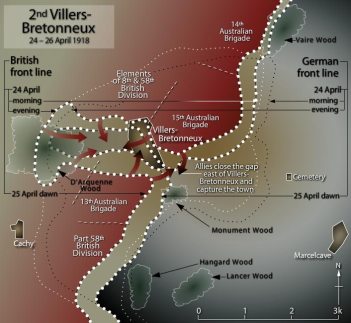 By 4am on the 25th April, the third anniversary of the Anzac Landing, the 15th and 13th Brigades had established themselves in a position around the village, albeit not fully surrounded, to make the enemy holding and reinforcing of the village difficult. However the Germans had yet to be forced out as the attack by two battalions of the British 8th Division allotted with the task of attacking where the Germans most expected it had suffered heavy losses in their failed attempt. As daylight came sniper fire increased from the houses in the village. The task of clearing now fell to the 57th Battalion. Every now again a machine-gun opened on them from one of the houses, a Lewis gun would pour fire on it from the front while other men made their way round and bombed from the rear, and finding themselves surrounded the Germans surrendered. This process repeated itself as the troops advanced. By the time the main street was reached 300 prisoners had been taken. Some of the scattered German parties fought stubbornly, while 200 were seen retiring across the open country south of the railway towards Monument Wood. To the south the 13th Brigade were approached by three white-flagged Germans carrying messages that they were surrounded on three sides and should surrender forthwith to avoid destruction. By now the Germans in the wood to the rear had been cleared and the response to the Germans was short and less than courteous! As it turned out, and confirmed by the three whippets which went on one of their fast reconnaissance behind enemy line, this was just a bluff, but for the Australian troops digging in this added to their anxiety particularly as a tremendous bombardment began to fall on them at 7am for an hour. At 10am a gap of 500 yards still existed either side of the railway, but due to the machine-guns at the Monument and Hangard Wood sweeping the plateau during the day it would not be until the early hours of the next morning that the gap would eventually be closed.