Following the evacuation from Gallipoli in December 1915, the Australian Imperial Force re-grouped in Egypt where it remained until March 1916 when it was redirected to fight on the Western Front. The Infantry Divisions arrived at Marseille in March 1916 and were transported north to be located either at or close to the Front for the next three years with the British Army holding the line from the Ypres salient in Belgium to the Somme in France. With the redeployment to Europe it was decided that bulk of the training camps and depots should be based away from the front in England, with the creation of four Command Depots for the returning injured or sick, and the Training Groups for each Division, supported by HQ and Administration at Tidworth and London respectively.Depots were created in France however for one main purpose, that of a reception and final training centre for men about to join or re-join their unit from either the Command Depots or Training Groups in England, together with those that had been discharged from the medical facilities within France and Belgium. The two locations that the Australians were to use throughout the war at Etaples near Boulogne-sur-Mer and at Le Havre, were part of a series of British Army bases that stretched along the French coast on the English Channel. 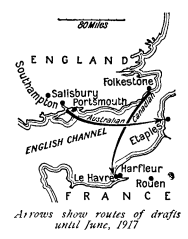 Australian soldiers arriving in France, whether reinforcements or those returning from hospitals, went to Base Depots before deployment to the front. All drafts, although they had already passed in England as fully trained, were subjected to further tests, a strict medical check, and at least ten days of additional training. These extra days of training proved frustrating for both the soldiers and for the Units often desperate to get hold of these men, and towards the end of the war the number of mandatory days of additional training was thus reduced.

The first Australian depots were established in March 1916 at Etaples, but this was inconvenient both in time and increased risk of submarine attack. The line of transport from Southampton to Etaples crossed that of the Canadians whose English depots were near Folkestone and their French depots at Le Havre, consequently in June 1917 the depots of the two dominions changed place, with the Australians moving to the much nicer location of Harfleur outside of Le Havre (map source: Bean Official History Vol III, P.178) 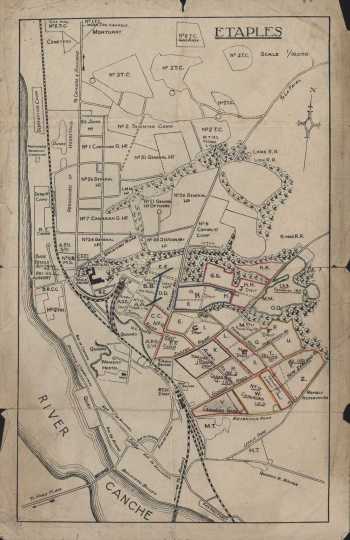 Before the war Etaples was a coastal fishing port about 24kms to the south of the larger port of Boulogne in the region of the Pas de Calais. The Etaples Army Base Camp, housing some 100,000 soldiers, was the largest of its kind ever established overseas by the British, and was built along the railway adjacent to the town. During the war it was a base for British, Canadian, Scottish and Anzac forces. It was served by a network of railways, canals, and roads connecting the camp to the southern and eastern fields of battle in France and to ships carrying troops, supplies, guns, equipment, and thousands of men and women across the English Channel. Being away from the front line it was relatively safe from attack, the exception being from the air, Etaples also became the base for numerous General and Stationary Hospitals, with beds for approximately 22,000 patients. In March 1916 Etaples became the base for the AIF. The attached map (courtesy of the Great War Archive, University of Oxford) shows the camp in 1918, i.e. after the Australians had transferred to Le Havre, but the naming of ‘Anzac’ road and the location of the Canadian Depots in the south-east of the camp gives a clue to where the the ADBD’s were located prior to June 1917.

For the new recruits of the British Expeditionary Force the ‘Bull Ring’, as the Etaples training depot became known, was notorious for its harsh regime and bullying from the training officers. Despite being on the coast (see photograph of Australian soldiers buying fruit from locals on the beach) according to many that went through the base it was not a pleasant place – unlike Le Touquet on the other side of the river where the officers were based – and with the intensive training in gas warfare and bayonet drill it was said that many a man actually looked forward to leaving the base and getting to the Front! It was probably with relief when the Australian depots moved to Le Havre in June 1917.

The Etaples Military Cemetery situated to the north of the camp contains 10,771 Commonwealth burials from the First World War, including 465 Australians, of which nine men are from the 22nd Battalion, all of whom died of their wounds. The large number of burials here (Etaples is the largest CWGC cemetery in France) is a consequence of the many military hospitals located in this area where men died of illness or, as with the aforementioned of the 22nd Battalion, from their wounds.

Le Havre is situated in the Upper Normandy region of north-western France on the right bank of the estuary of the river Seine, and today is France’s second largest port after Marseille. During the First World War Le Havre was one of the ports used to disembark the British Expeditionary Force in August 1914, and with the exception of a short period of time during the German advance of 1914 it remained No.1 Base Depot throughout the war. By the end of 1917 it contained three General Hospitals, two Stationary Hospitals and four convalescent depots. During the war it is estimated that 1.9 million British soldiers passed through Le Havre.

The Australian Division Base Depots (photograph above), and then replaced by the Infantry Base Depot were located at Harfleur (Rouelles) from June 1917 until the end of the war. In the St.Marie Cemetery in Le Havre there are 138 Australians buried.

In March 1918 the creation of the 1st Australian Convalescent Depot was authorised by the AIF, and was ready to take in patients discharged from hospitals or medical units from the 18th April. The sites allocated for the depot at Rouelles were camps 22 and 23 previously occupied by the 1st & 2nd ADBD’s but since amalgamated into the AIBD (map left). To aid in the men’s recuperation the site included a YMCA, and gymnasium, with regular sports matches and activities. From the Convalescent Depot the men were selected either for return to their unit via the AIBD, or for return to Australia via England for medical discharge.