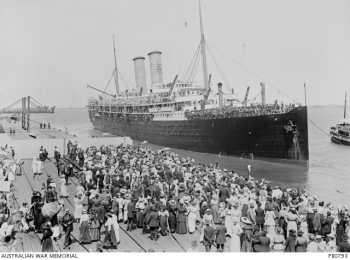 Moving men and equipment across oceans and to and from the front line to hospitals and training camps in Egypt and the UK was a massive logistical effort undertaken by the Allies during World War One. In this section we discover the types of hospital and troop ships used by the AIF and their action during the war. The troop ships appear in chronological order as they were used by the men of the 5th/22nd, the 22nd Battalion, the 2nd Division or the Australian Imperial Force as a whole. Links are also provided to sites containing a more comprehensive listing.