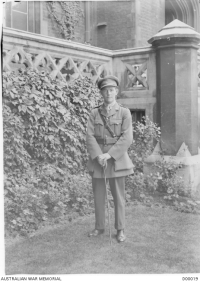 The following forty-one men were awarded for bravery during the 22nd Battalion’s involvement in the fighting and ‘peaceful penetration’ operations around Morlancourt in the late spring and early summer of 1918, particularly in the attack at Ville-sur-Ancre on the 19th May 1918. Included amongst the recipients was 2nd Lieut. (service number 1946) W. Ruthven (photograph right) who was awarded the Victoria Cross (left hand medal below) for his bravery during the Ville-sur-Ancre attack.

Click on their awards to read the citation for their individual action.