When the AIF left Australia in November 1914, the expected destination was England and the training grounds of the Salisbury Plain in Wiltshire. Overcrowding and shortages of equipment in England meant that this all changed and with the fleet approaching the Suez Canal it was decided that the Anzac troops would spend the winter in Egypt. Plans for a new camp in Egypt therefore had to be rapidly put in place. The arriving Australian and New Zealand troops had not brought any tents with it, but tents for 8,500 men could be provided and those for the remainder would arrive in two weeks from England. 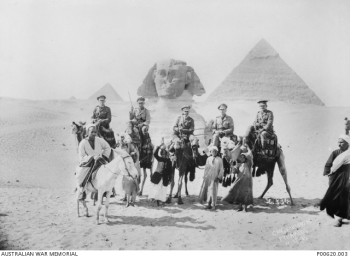 The camp at Mena (see map below) was chosen about 10 miles from the centre of Cairo just on the outskirts of the city, with enough space for the camps and manoeuvres for unlimited troops, and with the Pyramids and the Sphinx at Giza a spectacular back-drop. Within the few days since the change of plan had been made, British staff in Egypt had set contractors to work laying water-pipes to all the camps, extending the tramlines to the prospective depot at Mena, and forming the roads about the camp sites. Before the winter of 1914-15 was over, the valley in which the 5th Battalion had bivouacked on the night of 3rd December was filled, as described by Bean ‘with the hum, bustle, the dust, smell, sounds and lights of a busy city.’

Upon arrival in the Egypt the staff divided the desert around Mena into three large training areas, one for each of the infantry brigades of 1914. The divisional light horse artillery and engineers were given stretches of desert outside of these; the transport and ambulances were allotted ground nearer camp. The commanders were told to create training programmes to devote a month to the training of companies and squads, then ten days to training as battalions or regiments, after which ten days as brigades.

According to Bean the training was of exceptional intensity and a fine achievement. A very limited leave was allowed in Cairo after hours. Training would be for eight hours a day six days a week. All day long, in every valley of the Sahara for miles around the Pyramids of Giza were groups or lines of men advancing, retiring, drilling or squatted near their piled arms listening to their officer. For many of the battalions many miles of desert had to be covered in the morning and evening to and from their allotted training areas. At first, to harden the troops, they wore full kit with heavy packs. Their backs became drenched with perspiration, and the bitter desert wind blew on them as they camped for their midday meal and many deaths from pneumonia were attributed to this cause.

The training was fairly rudimentary and simply the old British Army training, but little advice came from the Western Front to the tactics being used in this new form of modern trench warfare. The Australian and New Zealand officers had to rely almost on themselves. They had not seen a bomb (grenade); they had scarcely heard of a periscope, so it could be argued that they were not prepared for what was to come. However the view at the time was positive and a newly arrived officer from England remarked that the Australian Division was at least well trained as any regular division before the war. A British officer on Birdwood’s staff said that a better division than the 1st Australian had never gone to battle.

It was tough in Egypt too, with basic facilities, and not much in the way of training beyond marching up and down the sand dunes and deserts. Although some Australians misbehaved and were sent home, the vast majority accepted that a soldier’s life can be pretty tough. However a month before the Gallipoli landing, Australian troops were involved in the first incident of what would become known as the Wasser Riots. The troops rampaged through shops in a district of Cairo known for its bars and brothels, setting fire to some of the businesses and brawling with staff and owners. Journalist C E W Bean reported that it was ‘obvious that there had also been enlisted a certain number of criminals, some of whom had entered the force with the intention of running gambling ‘schools’ or escaping punishment in Australia.’ The behaviour of Australian troops would continue to be a sticking point throughout the war. But looser discipline was considered by many of their superior officers as an acceptable ‘price’ when put beside their performance on the battlefield. Australians and New Zealanders were known as among the most fearsome and willing troops of the Allied forces.

The New Zealand Infantry Brigade separated itself and settled at Zeitoun on the northern outskirts of Cairo. The 1st Light Horse Brigade settled on the edge of the desert at Maadi Camp (see map above, courtesy of Digger History).

During the Gallipoli landings and the Sinai and Palestine Campaign of the First World War, Tel-el-Kebir located about 40km west of Ismailia was a training centre for the First Australian Imperial Force reinforcements, No 2 Australian Stationary Hospital, and also a site of a large prisoner of war camp. Some 40,000 Australians camped in a small tent city at Tel-el-Kebir of six miles in length. A military railway was eventually constructed to take troops from the camp to their vessels in Alexandria and elsewhere including for embarkation to the Gallipoli landings and later to France (photograph right of the 22nd Battalion en-route to Alexandria and the Western Front).

Following the evacuation of Gallipoli in December 1915, the Anzac forces were almost immediately transferred from Lemnos to Egypt as this was the only place where they could be properly refitted, rested and reorganised, and by which time many of the reinforcements, including the 5th/22nd were now waiting for them. A new site was chosen for them at Tel-el-Kabir. Being 30 miles due west of the central part of the Suez Canal and a few miles east of the eastern edge of the lowlands of the Nile delta, the location was strategic not just for the encampment of a large reserve to protect the Canal, but to provide a vast training area and reservoir of troops to be provided for other theatres such as Europe. A secondary benefit was that a distance of 70 miles from Cairo it would remove the problem of indiscipline faced when the troops were based much closer at the Mena Camp, plus protected the soldiers from the known dangers of Cairo.

At first the troops arriving at Tel-el-Kabir would have to sleep under their transport wagons or water-proof sheets, but were soon housed in a spacious tented camp (photograph left of the 22nd Battalion tents). The 1st and 2nd Australian Divisions were located here, whereas the Australian and New Zealand Division were located at Moascar near Ismailia and the canal.

Every day two per cent in each unit were given two days leave in Cairo. Overstaying of leave was fairly common, but an acceptance by the men to take the fine or punishment and the officers knowing their men’s willingness to fight had not been affected meant that this situated was pretty much tolerated.