For the Australian Imperial Force the 15,083 losses between 21st March and 7th May 1918 during the German Spring Offensive resulted in the need for re-organisation, something that was dreaded by all, and particularly for the men of the 36th, 47th and 52nd Battalions that were earmarked for disbandment over the coming weeks. For the British, the stream of reinforcements through conscription increased from a trickle to a flood, but mainly with the use of boy soldiers under the age of 19, many of whom were good but still lacked the hardening process and thus thrown headlong straight into some of the hardest fighting of the war.

Artillery during the day was followed by a dense rolling barrage behind which attacking waves from the 35th and 34th Battalions followed closely towards the enemy trenches in front of Morlancourt, often catching the young German garrison cowering on the floor. Both lines of the enemy trench were captured on a front of ¾ mile and 153 prisoners, 10 machine guns and three trench mortars taken at the cost of only some 100 casualties, mostly minor. At this point even such minor successes were encouraging to all the Allied troops, and conversely discouraging to the enemy. 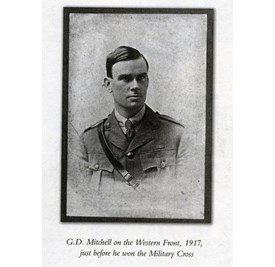 At 2am the 48th Battalion moved into position for the attack at Monument Wood but just as they were about to advance they were spotted and flares shot into the air to illuminate the area. A short and weak barrage at zero hour, followed by ferocious machine-gun fire and frenetic throwing of stick bombs in the area of the wire caused many casualties and the attack failed. Once the fighting had ended stretcher-bearers went out to recover the wounded under the supervision of a young German officer that had climbed out of his trench. Lieut. GD Mitchell, MC, (photograph above right) of the 48th did the same and they made arrangements for a formal armistice allowing the Australians to bury their dead in No-Man’s Land and bring back the wounded. At the end both officers saluted and returned to the trenches. With this unsuccessful effort the Second Battle of the Somme, which for most of the British Army had ended of 5th April, closed on the French and British forces in front of Amiens.

The northern most Australian division on the Somme, the 2nd Division (including the 22nd Battalion) was relieved by the British 18th (Eastern) Division and moved into reserve, ready to counter-attack should the Germans breakthrough in the sector. The Australian Corps held its now shortened line with three divisions – the 4th Division in front of Villers-Bretonneux, the 5th Division astride the river Somme, and the 3rd Division to a point half a mile south of the Ancre between Ville-sur-Ancre and Morlancourt.

On 25th April the Fourth German Army in Flanders attacked Mount Kemmel and captured it. However, with the German offensive stalled because of logistical problems, exposed flanks, the counterattacks by British, French and Anzac forces which had slowed and stopped the German advance, Ludendorff ended Georgette on the 29th April. Hazebrouck remained in Allied hands and as the British abandoned the comparatively worthless territory they had captured at vast cost the previous year in the Third Battle of Ypres thus freeing several divisions to face the German attackers, the newly occupied land was now a vulnerable salient under fire from the British on three sides. As with Operation Michael, losses were roughly equal on both sides with approximately 110,000 men wounded or killed.

The AIF 4th Division arrived at Villers-Bretonneux with the 4th Brigade, itself having just been relieved from Hebuterne, relieving the 15th Brigade in the 1,200 yard sector north of the Roman road. The 12th Brigade relieved the Australian 13th Brigade plus the 8th British & Moroccan Divisions south of the road on a front of 2,500 yards to the south-west corner of Monument Wood.