On the morning of 11th November 1920, the casket of the Unknown Warrior was placed onto a gun carriage of the Royal Horse Artillery and drawn by six horses through immense and silent crowds. As the cortege set off, a further Field Marshal’s salute was fired in Hyde Park. The route followed was Hyde Park Corner, The Mall, and to Whitehall where the newly constructed Portland stone Cenotaph, a “symbolic empty tomb”, was unveiled by King George V. The King placed his wreath of red roses and bay leaves on the coffin. His card read “In proud memory of those Warriors who died unknown in the Great War. Unknown, and yet well-known; as dying, and behold they live. George R.I. November 11th 1920”. The cortège was then followed by The King, the Royal Family and ministers of state to Westminster Abbey.

The casket was borne into Westminster Abbey flanked by a guard of honour of one hundred recipients of the Victoria Cross. The guests of honour were a group of one hundred women. They had been chosen because they had each lost their husband and all their sons in the war. The coffin was then interred in the far western end of the Nave, only a few feet from the entrance, in soil brought in a 100 bags from each of the main Western Front battlefields. A temporary stone was placed on top before the unveiling of the present Belgian black marble stone from a quarry near Namur at the remembrance service year later.

On the morning of the 10th November the Unknown Warrior began its departure from France, where Marshal Foch saluted the casket at the Boulogne quayside before it was carried up the gangway of the destroyer, HMS Verdun, chosen because it bore the name of France’s most famous battle. The Verdun slipped anchor just before noon and was joined by an escort of six battleships. As the flotilla carrying the casket closed on Dover Castle it received a 19-gun Field Marshal’s salute. The body of the Unknown Warrior was carried to Victoria station in London in South Eastern and Chatham Railway General Utility Van No.132, which had previously carried home the bodies of the executed nurse Edith Cavell and mariner Charles Fryatt.

The remains of four British soldiers were exhumed from various battlefields and brought to the chapel at Saint-Pol-sur-Ternoise near Arras on the night of 7th November 1920. Brigadier L.J. Wyatt and Lieutenant Colonel E.A.S. Gell of the Directorate of Graves Registration and Enquiries went into the chapel alone. The remains were then placed in four plain coffins each covered by Union Flags. The two officers did not know from which battlefield any individual soldier had come, and Brigadier Wyatt with closed eyes rested his hand on one of the coffins. The other soldiers were then taken away for reburial by the Reverend Kendall.

To celebrate and mark the end of the Great War, a Bank Holiday was declared in Britain with the focal point a Victory or Peace Parade (click on link for film) by 15,000 victorious Allied troops from twelve nations through the streets of London. It was reported that as many as 5 million people turned out for the parade along a seven mile route from Knightsbridge through Westminster and onto Buckingham Palace. Though the prevailing mood was in the main triumphant, the day of celebration and victory parade attracted some criticism from those who felt that the money would be better spent supporting returning servicemen who faced physical and mental injuries, and who needed work and a place to live.

A Cenotaph (photograph above) monument to those killed and wounded was unveiled in Whitehall by King George V, to mark the end point of the victory parade. Architect Sir Edwin Lutyens was commissioned by Lloyd George at the start of the month to design the monument, and had just 2 weeks to create a piece befitting of the memory of the fallen. Though it was a temporary wood and plaster construction, the Cenotaph was soon decorated with flower wreaths and the decision was quickly made to create a more permanent structure made from Portland stone and in the same design. Unveiled by the King on 11th November 1920 with the arrival of the Unknown Warrior en-route to Westminster Abbey, the Cenotaph remains the main focal point of remembrance in the UK.

Although the armistice, signed on 11th November 1918, ended the actual fighting of the First World War, it took six months of Allied negotiations at the Paris Peace Conference to conclude the Peace Treaty, and thus ending the state of war between Germany and the Allied Powers. The treaty was signed on 28th June 1919 in Versailles, exactly five years after the assassination of Archduke Franz Ferdinand, which had directly led to the war. Germany and Austria-Hungary were not invited to the negotiations, instead they were only allowed to present a response to the treaty, which they expected to be based on the ‘Fourteen Points’ put forward by US President Wilson prior to the Armistice. Terms of the Peace Treaty were drawn up mainly by the ‘Big Four’ of British Prime Minister Lloyd George, French Prime Minister Frances Clemenceau, President Wilson, and Italy’s Prime Minister Vittoria Orlando, with the first three deciding the key decisions. Australia also sent its own delegation under the leadership of Prime Minister William Hughes. 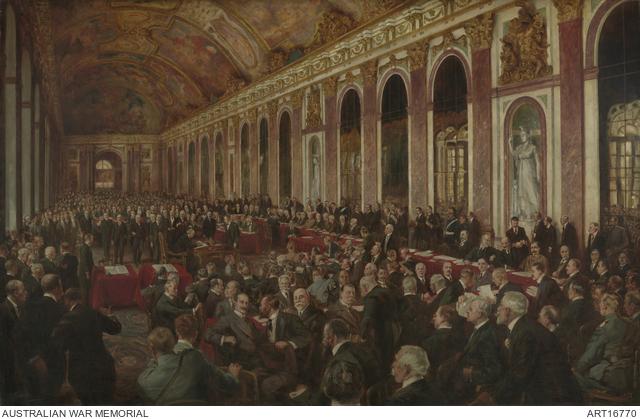 Germany was shocked at the severity of the terms and protested the contradictions between the assurances made when the armistice was negotiated and the actual treaty. One of the most important and controversial required “Germany to accept the responsibility of Germany and her allies for causing all the loss and damage” during the war. This article later became known as the War Guilt clause. The treaty required Germany to disarm, make ample territorial concessions and pay reparations to the countries that had formed the Allied ‘Entente’ powers.

In the years after it was ratified the Treaty of Versailles was revised and altered, mostly in Germany’s favour. Many historians claim that the combination of a harsh treaty and subsequent lax enforcement of its provisions paved the way for the upsurge of German militarism in the 1930s. The huge German reparations and the war guilt clause fostered deep resentment of the settlement in Germany, and when Hitler remilitarized the Rhineland in 1936 (a violation of the treaty), the Allies did nothing to stop him, thus encouraging future German aggression. The Treaty of Versailles was supposed to ensure a lasting peace by punishing Germany and setting up a League of Nations to solve diplomatic problems. Instead it left a legacy of political and geographical difficulties which have often been blamed for starting the Second World War. 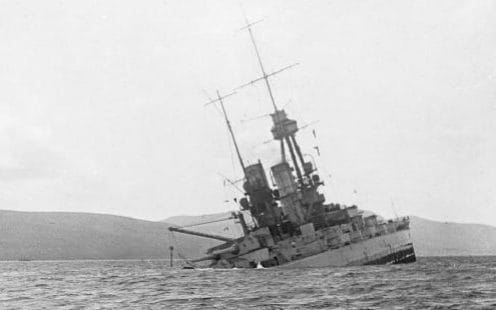 Following the end of the First World War the German High Seas Fleet was interned at the British Royal Navy’s base at Scapa Flow in the Orkney Islands under the terms of the Armistice whilst negotiations took place over the fate of the ships. Fearing that all of the ships would be seized and divided amongst the Allied powers, the German commander, Admiral Ludwig von Reuter, decided to scuttle the fleet. Intervening British guard ships were able to beach a number of the ships, but 52 of the 74 interned vessels sank. Nine German sailors were shot and killed plus sixteen wounded aboard their lifeboats rowing towards land. Many of the wrecks were salvaged over the next two decades and were towed away for scrapping, the rest left and are now dive sites.

The last days of the 22nd Battalion in Belgium passed pleasantly during the fine weather of May. The hospitality of the citizens of Marcinelle never waned towards the men and many happy and lasting friendships were formed. On the 24th May the final quota (No.57) consisting of 2 Officers and 71 Other Ranks left for England and to begin their return to Australia, and in so doing the 22nd Battalion ceased to function in the field.

The remnants of the AIF still in Belgium attended the Corps Commanders parade at Chatelet on the outskirts of Charleroi. Lieutenant-General Hobbs on horseback addressed the troops saying “At this moment, before leaving for Australia, I fear many of you are sad, because you are thinking with regret that everything is finished for the moment, and also because you are leaving behind you a lot of people whom you have learned to love and appreciate and also for your courage you have shown throughout this terrible war.” Lieut- Gen Hobbs also said he had recently returned from headquarters who were discussing where to erect a monument in honour of the brave soldiers who were killed. On that monument there would be inscribed in letters of gold the splendid deeds of the heroic Australians. In conclusion he again wished them a pleasant voyage to their own country.

Complimentary speeches were made by the Mayor of Charleroi and other public officials (photograph above of the Mayor in conversation with Lieut-Gen. Hobbs). The Mayor said they regretted the approaching departure of the Australian troops. The Belgians would never forget the services rendered to the Allied cause by the Australian Army. It was largely due to them that they had won the victory.

The AIF took part in the Dominion Troops victory march through the streets of London. The Canadians led the procession, then came Australian, New Zealand, South African and Newfoundland troops. Sir Henry Chauvel and Sir John Monash led the Australians. Chauvel joined the King on the dais, where seated opposite were several hundred wounded Dominion soldiers.

The AIF took part in the Anzac Day parade through London, where the troops were afforded the rare privilege of marching through the City with fixed bayonets.