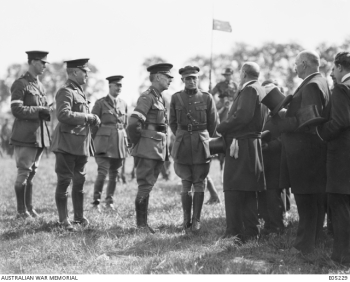 The remnants of the AIF still in Belgium attended the Corps Commanders parade at Chatelet on the outskirts of Charleroi. Lieutenant-General Hobbs on horseback addressed the troops saying “At this moment, before leaving for Australia, I fear many of you are sad, because you are thinking with regret that everything is finished for the moment, and also because you are leaving behind you a lot of people whom you have learned to love and appreciate and also for your courage you have shown throughout this terrible war.” Lieut- Gen Hobbs also said he had recently returned from headquarters who were discussing where to erect a monument in honour of the brave soldiers who were killed. On that monument there would be inscribed in letters of gold the splendid deeds of the heroic Australians. In conclusion he again wished them a pleasant voyage to their own country.

Complimentary speeches were made by the Mayor of Charleroi and other public officials (photograph above of the Mayor in conversation with Lieut-Gen. Hobbs). The Mayor said they regretted the approaching departure of the Australian troops. The Belgians would never forget the services rendered to the Allied cause by the Australian Army. It was largely due to them that they had won the victory.