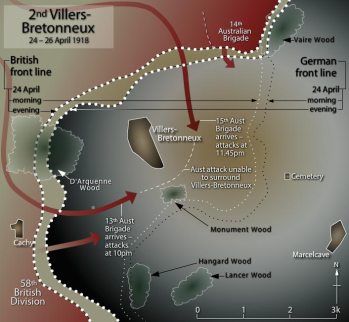 At 10pm on the 24th April 1918 the British artillery opened on the village of Villers-Bretonneux as the two brigades of the AIF, the 15th Brigade to the north and the 13th Brigade to the south, prepared to counter-attack and to encircle and then regain the village. Within five minutes the German barrage started to fall on the assembly positions and at 10.10pm with all battalions in position the attack commenced. For the 51st Battalion of the 13th Brigade they had to pass a wood on their left which had supposedly been cleared by the British earlier in the day but flares were soon in the air and German machine-guns enfilading their advance. Pressing on to their objective at Monument Wood would have been futile at this stage so the local decision was taken by Lieut. Sadlier (photograph below) to attack the wood and bomb the guns out. His attack for which he was awarded the Victoria Cross was extraordinarily bold taking the German machine-gunners by surprise and with the Western Australians fighting wildly in the dark and amongst the 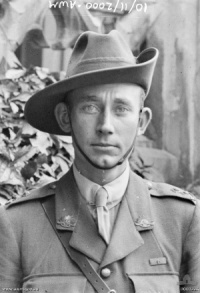 trees. By this audacious attack all the machine guns along the edge of the wood were eventually silenced and a great danger was removed from the flank of the advancing brigade. To the centre and right better progress was made, but in one incident they ran into a party from the 2nd Devon and 1st Worcester who unaware of the counter-attack thought that they were being attacked by Germans from the rear. As the 13th Brigade advanced they had to now negotiate the diagonally running wire entanglements that had been erected to stop the Germans, who by now had positioned their outposts on the other side of the wire. By morning the wire was lined by the dead of the 52nd and 51st Battalions. Some 500 yards beyond lay a stronger line of defenders but once having engaged with their Lewis guns the Australian line rushed yelling and shouting and the Germans, newly arrived from the eastern front and not used to this ferocity, turned and ran as the 52nd chased the fleeing parties into the dark between the Monument and Hangard Woods The 51st on the left, whose progress had been hindered earlier by the fire from the woods plus the railway embankment that ran to the south of the village, reached a quarry in which several British wounded who had lain there since the previous morning were found, along with a German tank lying on its side. However the objective at Monument Wood was becoming less achievable as the attack moved forward with the Germans to the left and rear in the village, and the 7th Bedford’s on the right not in contact with a flanking company so a decision was made to establish a defensive line on the high ground behind the quarry. Although short by between a quarter and a mile from their objective, they had still pushed forward a mile and in a position to squeeze out the Germans in the village if the 15th Brigade to the north were able reach its objective.