At 4.45am and under a mist an intense German artillery bombardment including gas shells fell on Villers-Bretonneux extending six miles south of Hangard into the French sector. This was not a resumption of the Michael offensive but a localised attack to put pressure on Amiens and create a diversion to the offensive that was taking place in Flanders. The village and its front was held by the 8th British Division, a particularly good British division but which had lost half of its 10,000 infantry in the March offensive. Reinforcements now coming from England included many young fresh-faced soldiers, and in some cases the battalions were more than half manned by boys under the age of nineteen. To the north and rear of the town Brig-Gen. Elliott’s 15th Brigade were in divisional reserve, with the 14th Brigade manning the front to the north of the village. If the village was lost Elliott had already primed his 59th & 60th Battalions for the counter-attack. Around 8am patrols from the two 15th Brigade battalions came across both wounded and non-wounded British troops that the Germans had been attacking with tanks. By 8.35am the 14th Brigade’s 56th Battalion in reserve on Hill 104 could see the village and that the Germans were now holding it and advancing north i.e. around the front of the 14th Brigade, but the position was secured through both the 56th Battalion and a battery of British field artillery firing at point blank range. At about noon the 8th Division began their counter-attacks, the first of which was delivered by three heavy tanks, one ‘male’ and two ‘female’. Heading for the vulnerable Cachy Switch Trench the tanks soon came 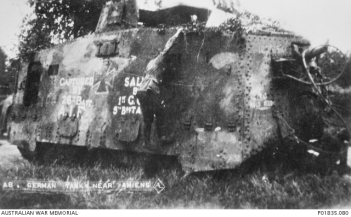 across at a distance of 300 yards a German tank approaching with two waves of infantry, and two more tanks on either side. The machine-gun carrying ‘female’ tanks were no match and after being fired upon retired leaving tank commander Lieut. Mitchell in his ‘male’ tank, carrying two six-pounder guns, to fight what would become the first tank duel with the leading German tank, manoeuvring to bring first one gun into action and then the other. Eventually Mitchell took the risk of stopping to give the gunner a better platform and at once hit the opposing tank three times causing the crew to abandon and flee (photograph above of the disabled German tank ‘Mephisto’). Seeing this and to his surprise the two other tanks turned and made off. As Mitchell retired after being hit by artillery shell he was passed by seven light ‘Whippet’ tanks speedily coming in to action to clear up the situation in front of Cachy, causing havoc to the German battalions forming up in the open. German artillery and their remaining tanks fired at the whippets putting four out of action, but by now the contemplated attack by the Germans had been foiled. As for the British, the only counter-attack carried out with success by the infantry was by 2nd Royal Berkshire in front of the 14th Brigade’s position on Hill 104. At 9.30am and as soon as General Rawlinson had learnt of the loss of Villers-Bretonneux he ordered the nearest Australian reserve brigade, the 13th Brigade billeted at Querrieu north of the Somme, to march south at once to III Corps to assist in the recapture of Villers-Bretonneux, which as he put it was ‘imperative to the security of Amiens’.