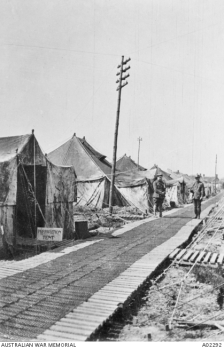 The Australian No.3 Casualty Clearing Station at Brandhoek (photograph right) was bombed killing an officer and one man, and five days later the Germans began to shell it. The nurses refused to leave, but eventually the hospital had to close and move to British No.10 CCS. Also on this day saw the second of the general attacks in the 3rd Ypres offensive, the Battle of Langemarck.