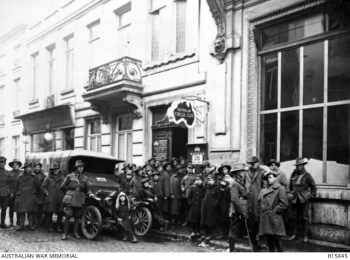 For the month of March, when for the most part excellent weather prevailed, the 36 Officers and 414 Other Ranks had plenty of time on their hands with rifle and kit inspections in the morning and lectures arranged by the educational branch. Visits were arranged to various industrial institutions in the Charleroi area. Films were shown nightly in the 6th Brigade cinema, as well as several dances arranged in the local hall attended by the men and the local mademoiselles, with the music performed by the Battalion band (photograph or men outside the YMCA Club, Charleroi). Through the month 14 Officers and 24 Other Ranks would be Struck off Strength as they returned to Australia, either in small groups or sometimes individually, with no large quota allocation this month.