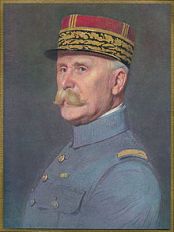 Following the failure of the French Army at the Chemin des Dames and the Second Battle of the Aisne, General Nivelle was forced to retire and he was replaced by General Petain (pictured) as the French Commander-in-Chief. General Foch was appointed as Chief of the General Staff in Paris.