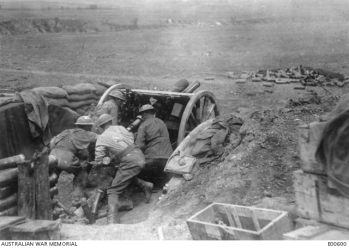 A limited number of batteries began their bombardment of the Hindenburg Line, their reduced number caused by delays in being able to bring the artillery forward and the limited obscured places available for them in this sector on account of the geography of the valleys running perpendicular to the front line. Furthermore, the supply of ammunition for the artillery was also limited by the difficulty of transporting it forward, though the Germans were surprised how much the British were able to bring in to their forward position given the destruction they had caused to the infrastructure during their withdrawal.