By the morning of the 28th the villages of Thilloy, Ligny-Thilloy and Le Barque were within the AIF 1st Division’s line, which now lay in comparatively green country and a distance of some 500 – 800 yards from the German main position, Till Trench. On the right the 15th Brigade of the AIF 5th Division had cleared the enemy from Barley Trench to the German pivot point at Le Transloy. To the west the 7th Brigade made seven attacks to Malt Trench but all were bombed back with heavy loss on both sides. British Fifth Army commanding officer General Gough visited the area and seeing the importance of Malt Trench gave the order for the bombardment of the German wire to begin at once. 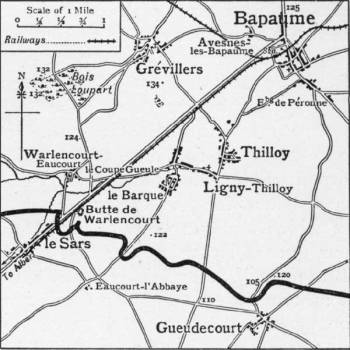