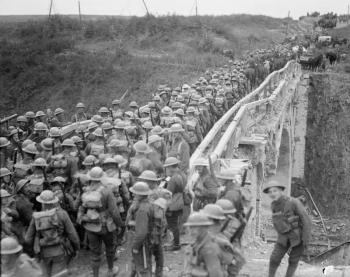 The day broke with familiar mist and at 5.50am the attack on the main Hindenburg Line that lay about the formidable obstacle of the St. Quentin canal was launched. Quite early in the day excellent news came in that the 46th (North Midland) Division within British IX Corps had skillfully crossed the canal at Bellenglise / Riqueval, thereby relieving pressure on the Australian Corps right flank. Pushing on and heading south-eastwards the Australians were surprised to see British troops from the 4th Leicester’s (46th Division) that had managed the extraordinarily difficult crossing of the canal, seizing bridges before they could be blown up (photograph above of the Riqueval bridge). The south entrance to the tunnel was now in Allied hands, but the north still in German. For the Australian Corps Lieut.-Gen. Monash had to amend his plans abandoning the objective of taking the whole Hindenburg Line in one day. Any concern that the enemy might launch a concerted counter-attack against his vulnerable troops astride the canal soon dissipated probably on account of the 46th Division’s success on the right flank.