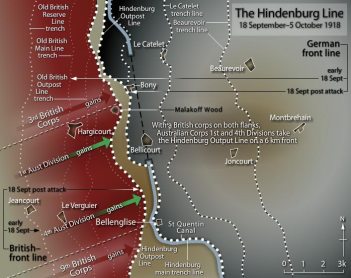 A soaking rain set in two hours before the 5.20am start to attack the Hindenburg Outpost Line (map courtesy of the DVA Anzac Portal), drenching the attackers and defenders alike. The Australian 1st and 4th Divisions attacked with two Brigades and with the exception of Grand Priel Woods in front of the 3rd Brigade no serious opposition was encountered. Under the devastating creeping artillery and machine-gun barrage the first ‘Red Line’ objective across the Corps front was taken by 10am, putting the Australians in possession of the old British front line of March 1918, but still some 1,500 to 2,000 yards from the Hindenburg Outpost Line. Sgt Sexton of the 13th Battalion took out a field gun and several machine guns for which he was awarded the Victoria Cross. Major General Glasgow’s 1st Division pushed on without pause and by nightfall had overwhelmed the garrison of the Hindenburg Outpost Line along its front. Major General Maclagan’s 4th Division also fought its way forward to within 500 yards of that line, but the troops exhausted from crossing difficult terrain and in full view of the enemy, were ordered to rest. Advantage was taken to advance the artillery, and at 11pm the 4th Division again attacked and after severe fighting also captured the whole of the objective trench system, during which Pte Woods of the 48th Battalion rushed a post and held off a counter-attack earning him the Victoria Cross. A great victory had been achieved with relatively little loss. The 1st Division, attacking with 2,854 men suffered 490 casualties in total whereas the 4th Division had 532 casualties from a strength of 3,048. Over 4,200 prisoners were taken in addition to the large numbers of enemy killed or wounded, plus the Corps captured more than 80 guns that had been abandoned by the German Army. As it turned out both the Australian 1st and 4th Divisions had fought their last battle in the Great War, finishing in a blaze of glory.