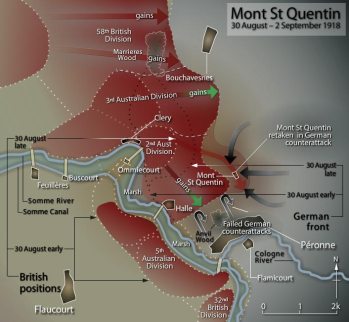 The advance by three battalions of the 5th Brigade of the Australian 2nd Division began at 5am on the 31st August 1918. With an average of just 330 men each the 19th, 17th and 20th Battalions attacked yelling and making as much noise as possible to make it appear that their numbers where much greater than they actually were. The ruse worked resulting in the surrender of many of the enemy lying out in their advanced positions, and a nest of seven machine guns was rushed and taken without any loss. The centre (17th) and left (20th) Battalions gained a footing in Feuillaucourt and on the main hill but the progress of the 19th Battalion on the right was stopped by heavy machine gun fire from St. Denis. This was the site of a ruined sugar refinery and lay on the main road between Peronne and Mont St. Quentin, and the defenders held out to the last. The 17th Battalion had by 7am passed through the ruins of Mont St. Quentin village and had crossed the main road when it received a strong counter-attack while it was recovering from the initial assault causing it to withdraw across the road to an old trench system to the west. The 19th Battalion beat off five successive counter attacks inflicting severe losses upon the enemy though suffering themselves 380 casualties. [Map courtesy of Australians on the Western Front]