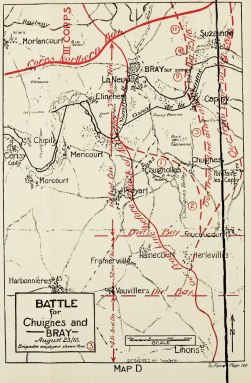 The 4.45am dawn attack by the Australian 1st Division and the British 32nd Division supported by a creeping barrage, full artillery engagement plus Tanks and Aircraft in what became known as the Battle of Chuignes was an unqualified success. Characterised by a series of river valleys feeding into the Somme, it was an ideal country for machine gun defence from the numerous woods, hedges and copses in the area. The 32nd Division successfully captured Herleville and the 1st Division under the skilful leadership of Major-General Glasgow had seized ground to a depth of 2,400 yards from Herleville to the western edge of Cappy by the river. The Germans suffered many casualties at the hands of the onrushing infantry supported by the Tanks which disposed of the numerous machine gun units, plus 3,100 prisoners were taken along with 21 guns plus a huge 15 inch railway gun that had been bombarding Amiens. To the north of the river the 3rd Division took the village of Bray, with the 40th Battalion taking 200 prisoners with few losses. This defeat in the Chuignes Valley compelled the German High Command to abandon all hope of holding the ground to the west of the Somme and they began the evacuation in the coming days ahead. In the British Third Army sector V Corps were now only two miles outside of Bapaume, and Field Marshal Haig issued a new order to be less cautious and for each division to be given a distant objective for exploitation.