12th November 1918: The Allied fleet passes through the Dardenelles and arrived at Constantinople (Istanbul) the following day. 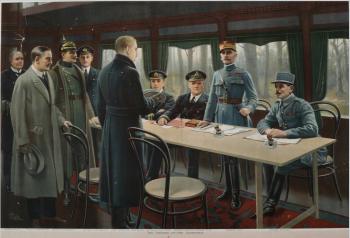 11th November 1918 – Armistice Day: Having been given 72 hours to agree to the Allied demands amounting to a complete German demilitarisation, the German delegation headed by Matthias Erzberger agreed and at 5.20am the Armistice was signed aboard Marshal Foch’s private train parked in a railway siding in Compiegne Forest. The Armistice would come into effect at eleven am on the eleventh day of the eleventh month bringing to an end a four year war that had cost over 11 million military and 8 million civilian lives. Meanwhile in the final hours Canadian forces captured Mons in Belgium, the place where the British Expeditionary Force first engaged the German Army in August 1914.

9th November 1918: German Kaiser Wilhelm II abdicated and went into exile in Amerongen, The Netherlands, bringing to an end 400 years of rule by the House of Hohenzollern. 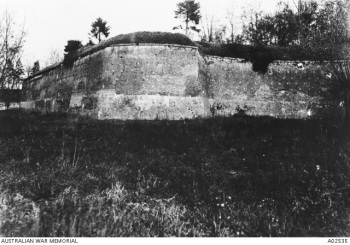 4th November 1918: The British Fourth, Third and First Armies with Debeney’s French Army on the right drove the Germans from their line between the Sambre and Scheldt. The artilleries of the Australian 3rd and 4th Divisions were employed with the British 1st and 32nd Divisions in IX Corps. Only the cavalry could now keep up with the retreating Germans. The following day the Australian artillery was withdrawn. Meanwhile the New Zealand Division attacked the fortress town of Le Quesnoy (photograph above right) gaining 10 kms, capturing 2,450 prisoners and 60 field guns which made the 4th November 1918 it’s most successful on the Western Front. The New Zealanders were relieved for the last time in the front line the following day.

3rd November 1918: Following the fall of Trieste, Austria-Hungary signed the terms of a separate Armistice with Italy in the Villa Giusti, northern Italy, which took effect 24 hours later.