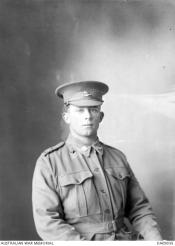 The following extracts are taken from the letters of 2nd Lieutenant Yeadon while training in Egypt and while in France. The originals are stored in the Australian War Memorial research centre in Canberra, and acknowledgement goes to the family of 2nd Lieutenant Yeadon and the AWM enabling the subsequent publishing within this commemorative project.

26th June 1915: Now we are drilling very hard and having some hot and long marches a good few of our boys are getting knocked up but so far I am going strong. Last Saturday and Sunday we marched out over 20 miles and back a total of 40 miles over the sandy deserts and it is very hot here in the day but the nights are almost cold and one has to use a blanket every night.

1st July 1915: I am pleased to have had the chance of meeting French people, their style seems so much for making friends and not so rough and course as the average crowd of us Australians. Our boys are by far the roughest here when on leave, great drunkenness and knock the natives about more than the Tommies. But when our boys are on parade or trench digging they knock out the English Territorials. Their own officers are sent over to see our men take up a new position and entrenching it and cant our boys use the pick and shovel. On average we are bigger by a good deal than the Tommies and they are a bit jealous of us

17th June 1916: What grand news about the Russians they seem to have more than making up from last year’s retreat in fact everything seems to be going on to our advantage and sometimes I do not think it will be very long before they are trying to call for peace. [A common sentiment in letters at this time]