Major MacKay’s full WW1 service record can be located in the National Archives of Australia. Full details are available online, NAA Series B2455

Extract taken from Captain E.Gorman’s ‘With the Twenty-Second’ – a History of the 22nd Battalion AIF: Major Mackay was one of the Battalion’s senior and best known officers. From Bendigo, Major MacKay had a distinguished University career and practised as a barrister in Melbourne before the war. He left with the Battalion as a Captain and was promoted to Major on the Peninsula. By his high personal character, his keen sense of justice, and undoubted military ability, he had gained the respect and confidence of all ranks.

The following extracts are taken from the letters and diary of Major MacKay while serving in Gallipoli, Egypt and France. The originals are stored in the Australian War Memorial research centre in Canberra, and acknowledgement goes to the family of Major Mackay and the AWM enabling the subsequent publishing within this commemorative project.

20th September 1915: We had our first experience of heavy bombardment a few days ago. I can’t say I enjoyed it – nor do I think anyone else did. It is just marvellous how little damage it really did. The fellows were very fine while it was on, and spent most of their time crying as to who had more than their share of bread and jam and complaining about the tea getting cold. It just happened at tea time, which was of course very inconsiderate of it.

27th April 1916: Message came through of an attack on our left. Ordered putting on of gas helmets everywhere. Found them very awkward and hard to see clearly owing to the darkness. Could see no signs of gas along the front.

1st June 1916: Inspection by Mr Hughes and Mr Fisher, with Birdwood, Legge and Johnson. Three cheers for Hughes, Birdwood and Australia, and all was over.

22nd June 1916: At 4 o’clock heavy bombardment by enemy began very suddenly. Found all wires cut. Tried to get artillery retaliation. Shells bursting everywhere – heaviest bombardment I have yet experienced. Bombardment lasted ‘til 4.50. Fifty minutes of hell. No casualties in D Coy – 3 for battalion.

22nd July 1916: I am sorry I have so little in the way of news but it is impossible to say much at this stage. If it is our lot to do something here I hope and trust we may acquit ourselves as we will be expected to do with the confidence that is felt in us will not prove to be misplaced. We are naturally all conscious to come through this terrible business and to see a victorious peace – may we all be able to do our utmost to bring about that for which we are all so anxious and may we have the strength and courage to face all that may be ahead of us and prove ourselves worthy of the name that our men made for Australia in the landing at Anzac.

26th July 1916: (diary) Got orders to get into fighting order. All valises etc to be left behind. With them I am leaving my diary, as it has been subject to no censorship regulations.

(Letter) Just a very short note written out in the open amid a good deal of bustle preparation on the eve of our entry into the big push. Our chance to prove ourselves has come at last – not for my part that I have been eagerly looking forward to it – but now that it has come I trust we may all prove ourselves worthy of the name of our troops made for Australia in their landing at Anzac. May God be with you all in your present anxiety for us both and may He bless us give us strength and courage to face all that may be ahead of us – and if it is Hiss Will may we be spared to return safe and sound to you all – and may the victorious peace for which we are all longing soon be ours.

31st July 1916: (letter from a German dugout, Pozieres) I just can’t write a letter at present but I must let you have a short note. We are out for a bit after the three most trying days and nights I have yet experienced. We go in again tomorrow night.

8th August 1916: [Letter from brother Eric]. The sad news about Dock will have reached you long before this does, but in all probability you would have received his particulars. We were in the front trenches for a few 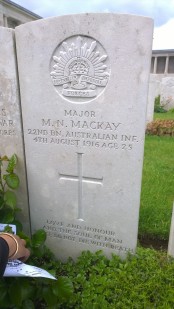 days the first time and although Dock was buried several times he got out of it safely. He did some splendid work in those few days and for it was recommended for a DSO. After several days of comparative safety and quiet they went right up again and charged on the night of 4th August. Dock led the first half Battalion and was killed outright by the machine guns while crossing no-man’s land. His body was brought in from there and would be buried behind our original line. I saw him last in the afternoon before they went up. Two of us were left behind and Dock said he would be better pleased if I stayed back. He seemed then to have an idea that he wouldn’t get through and said one of us was enough to be in it. [photograph taken by Jennie Marshall, granddaughter of Lieut. LW Harricks]